When it comes to advanced TV advertising, OTT and connected television (CTV) is leading the way, while addressable and streaming full-episode players (FEPs) aren’t far behind, while linear TV spending is set to take a major dive. That’s according to the results of a new FreeWheel survey of more than 300 marketing and agency leaders.

Over the past 12 months, 66% of national advertisers have purchased OTT or connected TV advertising, while both addressable TV (household-level targeting) and streaming full-episode players (such as Hulu) came in at 57%. 56% have purchased audience-based linear ad spots, and vMVPD and set-top box VOD round things out at 33% each. 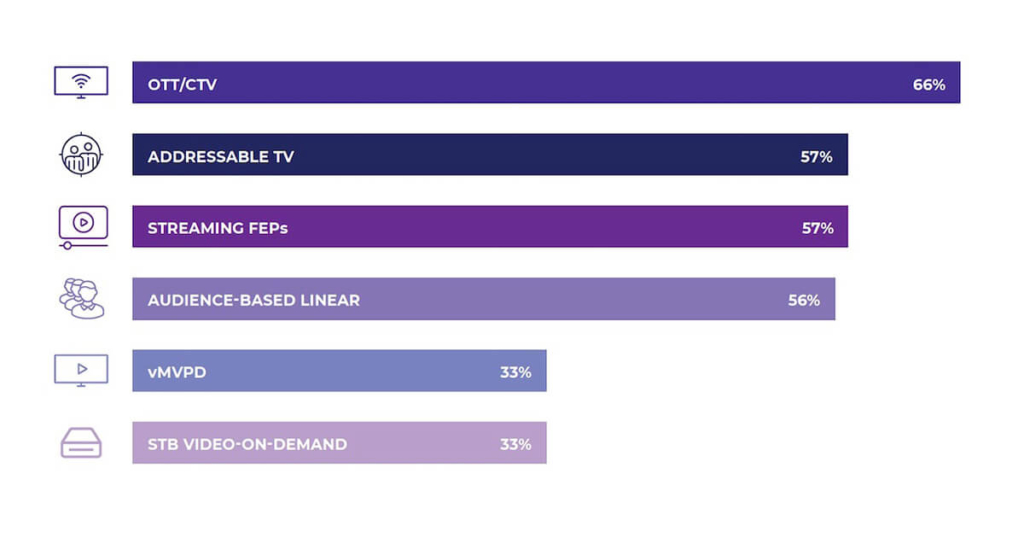 The study, which was commissioned by Advertiser Perceptions, also measured “spending optimism,” based on answers to the question “Do you expect your ad spending to increase, decrease, or stay the same over the next 12 months” in particular categories.

FreeWheel took the percentage increase in spending in a given category minus the percentage decrease to come up with an “optimism score” to predict the next 12 months. Those optimism scores are shown in the chart below—linear television scored a -8, while OTT/CTV, addressable, and streaming FEPs show year-on-year growth compared to the 2018 optimism scores (which forecasted 2019, while the 2019 score forecasts 2020). 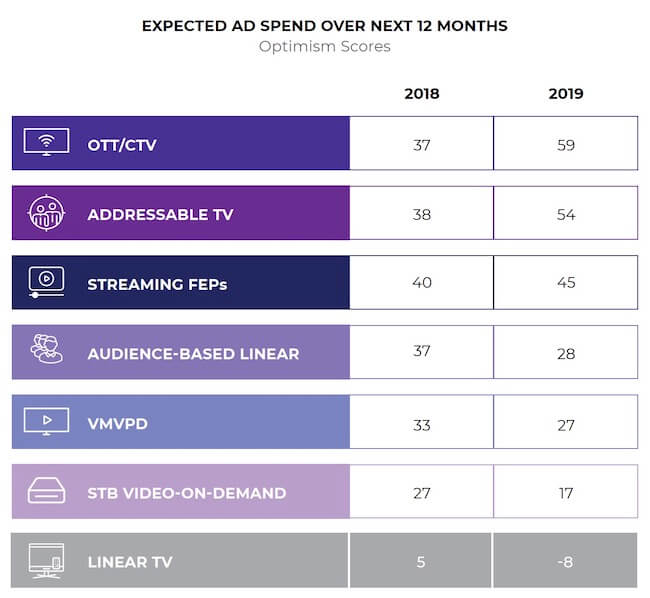 Digital video is also the medium of choice for advertisers to extend the reach of their traditional TV ad campaigns, with 78% of respondents saying they were most likely to use it in 2019, followed by 61% for social media, 54% for advanced TV and digital display, and 53% for search.

“In 2019, we saw our clients embrace data and automation for TV buying in ways we’d never seen before,” said Brian Wallach, SVP of advanced TV media sales at FreeWheel. “The technology is there and the interest is there. We expect the breadth of capabilities and applications to increase as we move through 2020.”

Looking ahead 5 years, survey respondents expect at least half of traditional linear TV advertising will be addressable by 2025, and 57% of them expect a full shift to IP-delivered linear TV by no later than 2030 (that number goes up to 76% when the time frame is changed from 2030 to 2035).